This edition of On The Easel today March 27, 2017 features my second installment in the Boots and Bricks series. This painting is a little different from the first in the series. How different you wonder? Well in this piece, the bricks are those of Athens Ohio, and the shoes are different. In my description of the first painting in the series, I highlighted that it was created for the town of Nelsonville, and represented what the town is historically known for: its bricks and Rocky Boots, which headquarters there. In this new painting the bricks of Athens Ohio are immortalized by my hand, and the representation of the culture and people are in the style of shoes I placed in the composition. 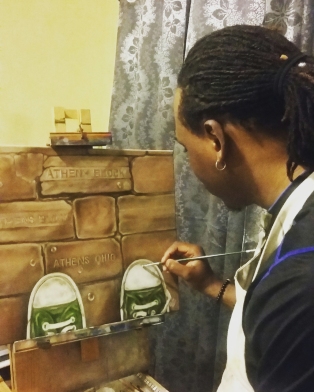 Similarly to the rugged work boots which represent the hardworking and blue-collar workers who built the town of Nelsonville, the youth and modernity of the culture in Athens is represented by the shoes in painting. The Converse brand of shoes is a common sight around Athens, and in my interpretation of what best symbolizes the predominant age demographic in the town; it was fitting to use this idea. In all my paintings I aim to have you be apart of the piece, not just be an observer, and this piece is no different.

The seemingly magnified view of the elements in the painting is done to visually engage you in the artwork, bringing you close to what I actually see every time I look at the bricks while walking down Court Street on a rainy day. In painting this, I told myself that I wanted my viewer to not look at the bricks the same again. I want you to see the history, see the work put in to lay those bricks, and how similar those bricks are to the people in the town. A brick by itself is just another brick, and no two bricks are the same.Yet when put together, they create something special, and make a place that more historic based on what they created.