What would you purchase if you were a millionaire or a billionaire? Hotels, fancy cars, chateaus in faraway countries? Or would you spend your money on art- paintings, sculptures and the like? Some of the wealthiest people in the world do just that, but why. Why do we buy art? Why do some people collect these creations, oftentimes by artists who no one has ever heard about? Is it out of love of the arts, competition for bragging rights to see who can have the best or most expensive work of art, or is it for business purposes?

For each individual, the reasons vary. Some say it’s because they like rare things. Some say it’s because the work speaks to them in a certain way that is unique to their emotions. Some even say it’s because they want to do their part in supporting creative talent that would oftentimes go unnoticed. Whatever the reason, people just love to collect art, and will oftentimes pay a hefty price for it. From Canvas to Collector features some of the collectors of my artwork, who have shared their personal thoughts about what they love about the piece they selected, and what personal meaning it has to them.

This collector walked away with, “a steal of a painting” when he visited the Garrett Museum of Art in Garrett Indiana, for the Essence of woman exhibition. He said that he was on the hunt for an original still life painting, that would be a centerpiece in his home, and that would live among the other collections he has procured throughout the years. What he loved about the painting was the boldness of the color of the daisies and the movement in the fabric.

The life of Muhammad Ali touched millions of people around the world, even people who he had never met. This collector, Lucas Wright is one of those people who were inspired and enamored with the legend of Ali. He fell in love with the sport of boxing at a very early age, partly because of Ali, and admired him since. What drew him into the piece was the fact that I captured Ali just as how he remembered him, in his prime, as this young, spry and fearless fighter. He also admired my portrayal of Ali in a kingly character, which he believed was the most appropriate portrayal for such an icon.”I’ve admired his moxie my whole life. He wasn’t scared to speak his mind, and stand up for what he believed in”. Wright further commented: “It was the right purchase that has sentimental value to me, that can hang on my wall forever”

Ever so often we come across imagery that not only grabs our attention but appeal to some part of us that renders us incapable of looking away. This is the very same feeling that was felt by Tina, which prompted her to claim this piece as hers. In my most recent exhibit, she sat directly beside the print of my painting Dahlias and Daisies, and in her words “I couldn’t stop looking at it”. From that moment, she decided that she had to have it. I’m pleased to say that she is now apart of my growing number of collectors, who not only love my work but connect with it on a very personal level.

I don’t do art for art’s sake. I do it for the positive impact that it can have on a person’s life. The power of imagery lies in the feelings that are evoked upon one seeing it. In creating this piece, I set my sights on the power that is contained in not only the elements and principles of art but also iconography. Both symbolism and iconography share a powerful relationship in this piece, and this is what Catrice, one of my newest collectors discovered in my paintings, especially in “When The Rain Comes”. According to her: “I fell in love with this painting the first time I saw it. It spoke to my spirit and soul.” This level of connectivity with my work is one of the driving forces behind my creativity and art career.

Art with feeling- art that speaks to the individual and that has personal meaning; that is the type of art I aim to always create. Two paintings bring to the forefront feelings that resonate deeply with the collector of “Blissful Reminiscence” and “Finally Free”.

“The content of each piece evoked strength, beauty and a sense of ethnic pride” that holds a unique place in my personal experience. Placed strategically in her home, each painting serves as a reminder of her essence as a strong black woman. 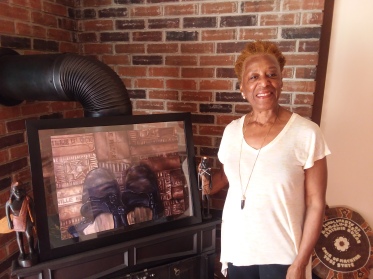 Charles Saatchi once said: “I primarily buy art to show it off”.  My question is, why not show it off? Why wouldn’t you become a collector? I put a high value on each of my collectors, for not only do they support me, but they also support the aesthetic of art. Dr. T is an avid supporter of the arts and of ABFA, and is the proud owner of a limited edition print of Boots and Bricks (Nelsonville). In asking her about her thoughts on the piece, she replied: “It exemplifies vividly my years as a student at Ohio University, which is why I had to acquire it. The nostalgia of the boots on the bricks especially. They gave me pause to chuckle, as I remembered navigating those bricks as a young woman in one and two-inch heels.” This level of connectivity is what I strive to attain in each work I create. For it is the meaning behind each piece and its impact that is the most important.

One of my greatest inspirations as a landscape painter is the great John Constable, whose paintings immerse you into not only a place but the very feelings which connect you to that place. This immersion through imagery is what drew my latest collector Alex to this painting. When asked about his thoughts on the piece, he replied: “It was the sky that captured my attention, and pulled me into the entire painting, connecting me with my intense love for nature”. While creating this painting, I thought of how proud Constable would’ve been as I channeled his spirit through each brushstroke, for as he says “the sky is the source of light in nature- and governs everything.”