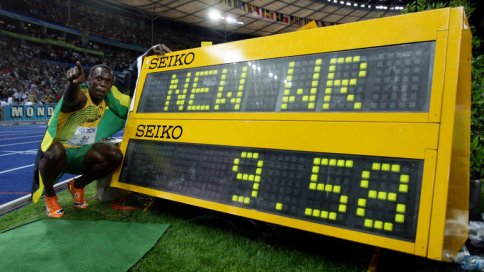 Who is the fastest man in the world, do you know? If you are into sports, especially track and field this question is easy to answer: Usain Bolt. When I say his name it brings chills and goosebumps to me. Why, you may ask? It’s not only because he is the greatest sprinter in the world, and its not only because he has broken his own world records multiple times either. It’s because he has transcended the term “track and field icon”, and the fact that he is Jamaican makes it even sweeter. Usain St. Leo Bolt is not only the fastest man in the world currently, he has been so for quite a long time now, and will possibly stay that way for decades to come, possibly forever.

Usain is one of us. When I say that I mean, he is one of us Jamaican boys, having dreams of being like the sports icons we admired growing up, or one of the many people who have made a positive and permanent mark in this world, like Marcus Garvey did, and Bob Marley. Growing up in Jamaica and running around barefooted, playing football (soccer) outside with the other children in the neighborhood…just being rowdy island boys is the norm, and to think that Usain came from such humble beginning, to now being one of the biggest names in the entire world, words cant really describe the feeling it gives. When he shattered arguably the most iconic of all records, which he set a few years before at the IAAF World Championships, clocking 9.69 seconds in the 100m sprint and claiming the gold medal, a new identity took shape- a new identity for not only him, but for us as Jamaicans- for us as Jamaican men. 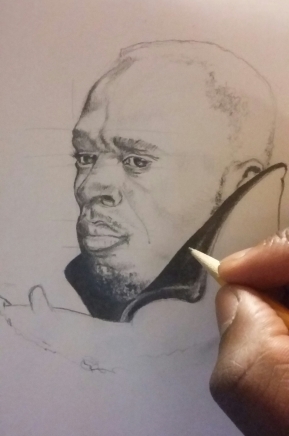 Coming back in 2009 and outdoing what he did a few years before to clock a blistering 9.58 seconds, which to most was the most unbelievable thing they ever witnessed in their professional career, and in reality, ever, Bolt set in stone his mark on this world, and a mark for Jamaicans everywhere. A standard was set. A standard that makes Jamaicans everywhere walk with their heads high, flags high, and voices send out. For this small country, no bigger than Colorado to feel like it is the biggest country in the entire world, with the proudest and most patriotic people in the entire world, it causes chills and goosebumps. This is why I wanted to show my appreciation for him by doing this portrait. In this portrait, I aimed at capturing his intensity in profile and also this silent charisma, that plays well with his bravado. 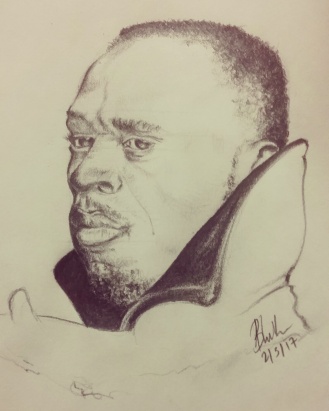 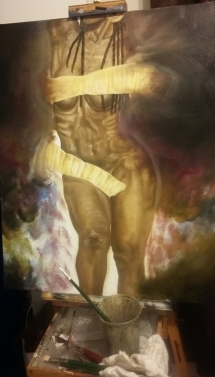 Today 4/29/16 On The Easel features my newest painting. Inspired by my love of figurative art and the female form, this piece explores the anatomy of the voluptuous, athletic female figure. I intended to create a mystical dreamlike effect that enveloped the form and add a unique sense of emphasis on the figure in the composition. I intend to incorporate the use of delicacy in the background as I create the mystical surroundings, but at the same time use the power of strong skin colors that highlight the muscle structure and form of the figure. Creating subtle details in the background i want to allow the colors’ layers to create depth in the piece, which will pull the viewer into the piece beyond the figure.

Upon completion, this piece along with two other figurative paintings I created will be apart of an exhibition at the Garrett Museum of Art in Garrett Indiana.